Chalk one up for democracy, folks. Apple Inc. got stuck with its hands in the cookie jar, and it ain’t pretty.


The tech juggernaut’s suspected antitrust activities were outlined in a 160-page ruling by senior federal judge Denise Cote, who found Apple guilty on July 10 of colluding with five major publishers to artificially increase the prices of e-books following Apple’s launch of the iPad and iBookstore in April 2010.

Because the case was tried by the U.S. Department of Justice, the federal government now has influence over future legislation regulating all of Apple’s digital content negotiations, including movies, music and TV shows.


Apple’s brand identity remains strong, but their pristine reputation has been tarnished. Behind the sleek, glossy veneer of iPhones and the hip, convenient and portable iPod Shuffles is a sobering reminder that Apple is a business, and businesses need to make money. Whether they decide to do that honorably is up to them.

We’ve yet to see the full extent of the fallout in the wake of Apple’s court loss, but there are some lessons businesses can learn if they want to avoid the same pitfalls.

Meditate on this for a bit: Apple successfully convinced five of the country’s largest publishers to accept a deal that netted the publishers less money under a different type of contract with Amazon (an ‘agency model’) in exchange for artificially inflating e-book prices, keeping hardcover book prices at an appropriate price point and pocketing 30% of all e-book sales.

Macstories has a great overview of the agency model and the wholesale model publishers previously employed with Amazon.

Apple’s foray into violating federal antitrust laws stemmed from book publishers’ concerns over Amazon’s e-book pricing practices. Amazon purchased the rights from publishers to sell e-books in the Kindle marketplace, then set the price of those e-books at whatever they wanted. Most best sellers sold for $9.99 – a definite bargain. Publishers feared the $9.99 pricing trend would eventually be “locked in,” similar to the now-commonplace and globally-accepted 99-cent programs on Apple’s App Store.

Once the $9.99 price point was locked in, publishers feared their hardcover books – the biggest moneymakers – would become obsolete once people realized they didn’t need to spend $25 or $30 on a New York Times bestseller. The agency model publishers agreed to with Apple – and later Amazon – meant publishers took less money from overall e-book sales, but their precious hardcovers maintained their desired prices.

2) Progress is inevitable – accept it gracefully

The publishers involved in the antitrust scandal – Macmillian, Penguin, Simon and Schuster, Hachette and HarperCollins – collectively took one giant, desperate step forward into the digital publishing world in an attempt to keep the cash flowing from their brick-and-mortar stores.

Instead of adapting, the Big Five cried and wailed until Apple proposed a crooked solution that would keep Apple’s coffers overflowing and maintain the publishing market’s dated price points.

If you want your brand to thrive financially and jive with your customer base, don’t scowl and stamp your feet when you run into competition that may have out-competed you. It will happen and you’ll come off antiquated and stubborn – a curmudgeon refusing to adapt to a shifting reality.

If your reaction to change is violating federal law to revert things to the good ol’ days, you aren’t much of a businessperson. The real reward is outsmarting your opponent and reinventing your approach to doing business. Your customers will appreciate the innovation and your employees will find renewed excitement in the challenge.

3) Your customers are smarter than you give them credit for

In several subheads of Cote’s ruling, the judge railed against Apple’s senior vice president of Internet software and services, Eddy Cue, for his dishonesty and less-than-credible testimony.

Part of Apple’s contract with the Big Five stipulated that the publishers force Amazon to move to an agency model – the same model publishers agreed to under Apple. Cote writes in her ruling on page 84:

Cue admitted at trial that Apple “expected” each of the Publisher Defendants to demand that Amazon move to an agency model, but denied actually “knowing” that they would. This testimony was not credible, for many reasons.

Your customers hate corporate doublespeak and their visceral reactions to corporations’ doubles standards only serve to drive business away. When a senior vice president like Cue tries smooth talking his way out of allegations with months worth of evidence piled up against him, customers aren’t shaking their head in awe of his tenacity and toughness; they’re in disbelief someone would actually believe a word he says.

Today’s consumer landscape looks vastly different than it did even two years ago. Be upfront with your successes and mistakes. If an entire production run was tainted, explain what happened and what’s being done to prevent future occurrences. Don’t ask customers to “stick with you through these trying times” and expect them to just because you asked nicely.

Enough companies with similar products or services exist today that consumers often have a dozen options to spend their money on. You have a limited number consumers to attract. Don’t spoil your relationship with them. 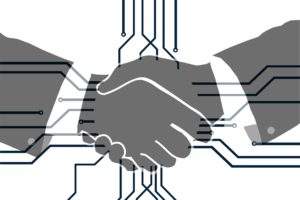 The 3 Most Important Lead Generation Metrics

So you’ve embarked on a campaign designed to generate more leads for your business. Is it going well? Great! How do you know? Even if

Your temperature-regulating beer stein with LED indicator just exploded on the scene.

Patterns and textures add depth to a brand and can help emphasize specific elements or feelings. They’re useful for shaping a brand identity. At Hey