The world of big time brands saw some major attention last year. I deem 2014 the year of the re-brand. From Pizza Hut to Southwest Airlines it seems many industry leaders got a recent face lift! Along with the visual identity changes we can see, there are some more subtle but equally as impactful strategy and messaging changes too. I dissect the big winners, kinda winners, and fails of the year in re-branding. When I started writing this blog I wasn’t sure if Pizza Hut was winning or kinda winning.  However, after seeing this new re-brand in action I give it two thumbs up!  There are so many interesting and creative details to the re-brand, and the strategy, and the roll out so far seems very clever too.  They are the only ones in the fast food pizza market to offer an “authentic” Italian experience.  The logo is modern, most ad’s are using lots of black with the red logo, its sexy and sleek.  The campaign even plays on the fact that real Italians will enjoy their food. It’s a little higher end now too – the food is slightly more gourmet, featuring new crust options that are trendy and toppings that aren’t your typical pepperoni or sausage. They took their pain points and really addressed them boldly both figuratively and literally. The brand wasn’t the only thing that changed. Pizza Hut made a complete overhaul to the menu, offerings, advertising, and approach. They re-positioned themselves too.  The average 8 year old might not be drawn to this new brand and the new menu, however a young professional who is somewhat health conscious and looking for something new with innovative ingredients and a bit more of a gourmet experience might be more excited about this brand.  Pizza Hut found an un-tapped market in the fast food pizza arena and went for it.  If they can stay consistent and keep up the quality, boldness, and frankly humor they’ve managed to infuse without it feeling “dumpy” I think we have a real winner. Southwest is a BIG WIN in my book.  A couple things were done so right here.  First of all, Southwest rebranded before they “had to”.  Their brand went from good to great and that sense of forward thinking and impactful timing allowed them to carry the brand loyalty and previous equity seamlessly into the re-brand.  Additionally, the brand launch was exceptional.  From catchy signage that explained the ethos of the new brand to really thoughtful and strategic press releases they covered all their angles. Then, of course, you have the new identity.  When I look at these side by side, it’s really striking but still maintains the best of Southwest.  The colors were very strong and identifiable, the lettering changed to include lowercase making it feel more friendly, and the heart replaced the outdated plane icon.  I could analyze this one forever!  They capitalized on the fact that you can trust them, which by the way, they have been doing in their advertising leading up to the rebrand, so they really set the stage for it anyways.  The airline that doesn’t gouge you for bags, makes it easy to check in, let’s you pick your own seats, has funny staff, and is extremely transparent with pricing IS TRUSTING!  Their message matches their behavior and the warm, unobtrusive little heart, is a simple nod to how so many of their customers already feel. Can we talk about how bla this is?  I’m not sure why they really bothered.  The font was cleaned up which I appreciate and they tried to incorporate some trending design techniques, but the monogram is doing nothing for me one way or the other.  Typically such an innovative company, I was fairly disappointed in this lackluster attempt. So, Reebok unveiled this rebrand amidst losing major market share in the main stream sports industry.  Over the years they just haven’t out innovated (or really at all since the Pump Hi-Top!), and we know what happens when you get comfortable.  One area that Reebok has seen growth in though, is CrossFit.  They took this angle and have attempted to refocus their company on fitness in general versus sports.  With this clear strategy, creating a brand for fitness at any age they definitely have a decent sized market to cater to and I’m not clear that any other large scale brands are courting this segment so distinctly.  Will this new look of Reebok resonate with the voice of the average Joe trying to stay healthy and trim?  If they stay consistent I think this is a good one to watch.  The potential is there and the look feels much more approachable.  Time will tell on this one!

Poor, poor Olive Garden.  If anyone gets the award for worst rebranding press of 2014 it is definitely Olive Garden! The publishing world was a flutter in March of 2014 when Olive Garden released its new logo to the masses.  After getting completely railed, I actually had to check to see if they kept it, and in fact they have! So after a horrific unveiling I must admit that I think this logo isn’t so far off.  The bigger problem with the rebrand as far as I’m concerned, is from a strategy perspective much more than a design one.  The new identity feels overly casual but not as good as other casual ie. Panera, also not casual enough as they are still serving sit-down meals.  They have made no attempt to actually make better food so you have a subpar identity representing a subpar product and actually it represents the brand quite well.  Unfortunately they took this opportunity to ignore all the pain points and this new “branding” is void of any real substantial forward thinking or change, which again, seems to represent the “brand”. :/

5 Companies we wish would re-brand in 2015…
because let’s be honest, these folks need a new strategy, identity, and the touchpoints to redirect their waning consumer brand sentiments.

1. The Republican Party
Kentucky Senator Rand Paul(R) loudly complained that the Republican brand “sucked”, and many agreed with him. Rand Paul singled out the voter id laws that have been sponsored by the party over the past few years as an example of “dumb legislation” that costs the GOP votes and hurts the party’s brand.

2. Sears
Sales are plummeting and they no longer promote their differentiators. How are they any different from Kmart, Best Buy for electronics, a dirty version of Target, and a not as cheap version of Wal-mart? I guess getting lost in the middle and coasting for years can eventually have it’s drawbacks.

3. Blockbuster
Ok, the block has not been bustin’ for quite sometime. I actually looked them up to see if they were still around. The re-branding process would go a long way for a brand that used to command an impressive amount of market share but just didn’t really address changes in technology at all. They played it safe and have not been forward thinking or strategic since they fell off.

4. Blackberry
Things just keep getting worse for Blackberry. They’ve been featured on a Top Ten list of companies that will disappear in 2015. They have made a lot of recent changes to their product line, but it might be too little too late. They haven’t managed to solidify their messaging and differentiate themselves from the market. Additionally the name carries an awful lot of stigmatization, as they have been steadily losing users to Apple and Android.

5. Abercrombie & Fitch
Wow, how the mighty have fallen. It’s crazy how cologne drenched stores, half naked men in mall hallways, and really small clothing has not become a mainstay eh? The problem here is forward thinking. When you are on top you need to stay hungry not snobby. Not only did they not grow with their audience, they also assumed as their audience aged that the next generation would want the same things. As mall traffic is declining, and ubiquitous clothing is being trashed for the individual look, their business model is just not relevant. A re-brand could go a long way here!!

Branding vs Marketing: What’s the Difference?

Which came first, the chicken or the egg? The branding or the marketing? 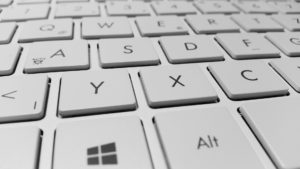 When Hey Now! first got into the blogging game, I HATED it. Even though I was trying to generate more leads, I thought, “blogging is